Dr. Sharma plays sitar effortlessly and enchantingly. Her beautiful renderings of Indian classical ragas create a magical world for her listeners. Her style is unique and yet deeply rooted in traditional Indian classicism. She is also on the approved list of artists at the Maharishi University, Iowa, and has performed several times at Maharishi TM centers as well as give sitar workshops at the University in Fairfield, Iowa.

Dr. Suman Sharma started learning sitar in India at the age of fourteen. She was soon playing in music festivals and winning awards. After earning an undergraduate degree in Music and Economics along with an M.A. in Economics, Sharma decided to devote herself completely to music. She joined the Masters program in music at the University of Delhi, India, and completed her doctorate under the guidance of  world renowned sitar maestro, Pandit Debu Chaudhuri. She also received a fellowship from the University Grants Commission (U.G.C.), awarded by the government of India. Additionally, Sharma holds Sangeet Visharad in vocal music under the guidance of Ustad Shamsuddin Sheikh who also helped polish her artistry. In India, she performed regularly at music festivals and in traditional settings.
Since coming to the United States, Dr. Sharma has been active in the Indian classical arena here.

Dr. Sharma has recorded several music albums, both solo and accompanied by other artists. Melody of Joy, My Sitar, Sitar Saurabh, and Monsoon are four of her most popular music albums. She has also written a couple of  books, Know Indian Songs and My Favorites, which are unique in their presentation of popular Indian songs and prayers in Western notations. Sharma’s books enable people trained in Western music to play traditional Indian music.

In addition to being an accomplished performer, Dr. Sharma is a renowned sitar teacher in the tri-state area (DC-VA-MD). Several of her students have won accolades at music festivals and competitions.

She is also an American Red Cross Water Safety instructor and lives in Washington, DC. 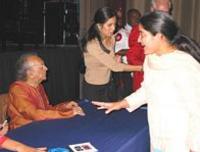 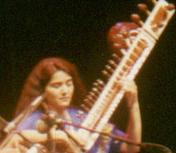 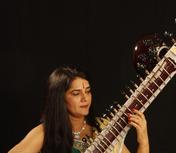